The recruiting team at Stripe was facing a dilemma: their once-robust employee referral program was losing steam. Fast-paced growth and expansion to multiple offices meant the tried and true methods of plying employees with cookies and manually combing through their networks no longer cut it. They need to figure out how to scale an employee referral program, and fast.

Katie Bishop and Lizz Hounshell from Stripe’s recruiting team enacted several strategies to get their referral pipelines back to fighting weight, and to hear the full story, we got them set up on a webinar to explain the nitty gritty. Here’s the skinny.

Since Stripe’s early days, a significant number of employees had come from referrals. But over the course of a few years, there was a steady drop in the percentage of referrals from 43.6% to 36.8%.

The recruiting team realized the old approach for sourcing from employees’ networks was no longer sustainable. The practice of gathering a bunch of employees in one room, manually combing through their social networks, and entering those referrals into their applicant tracking system was too time consuming to be viable. 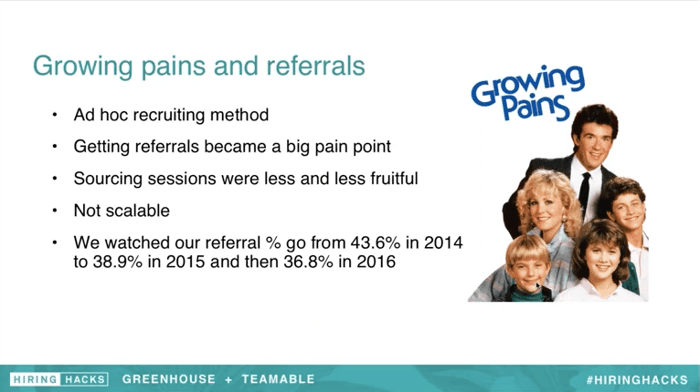 The Solution: A Simple and Scalable Approach to Referrals

The talent team realized one of the keys to increasing the number of referrals was to get employees excited about making referrals as early as possible. They began to offer sessions during new hire onboarding to introduce the referral program and familiarize new hires with Stripe’s recruiting philosophy. 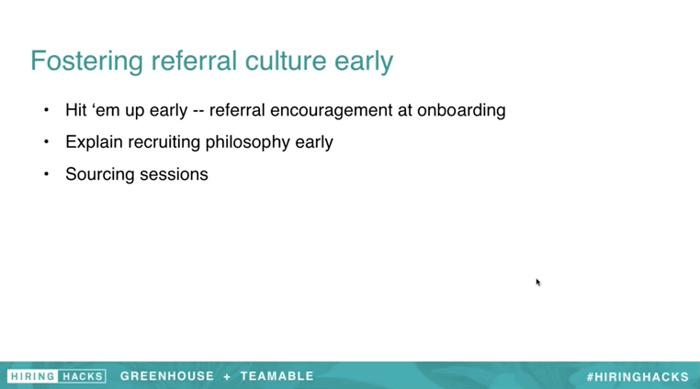 In addition to encouraging new hires to build the habit of making referrals, Stripe’s recruiting team opted to roll out Teamable to make the referral process more simple and scalable. They chose Teamable because it was super simple for employees to use, and also gave employees the opportunity to approve contacts the recruiters wanted to approach and review the messaging. This helped establish trust between the recruiting team and employees, since they knew their entire network wasn’t going to get spammed by the recruiting team. 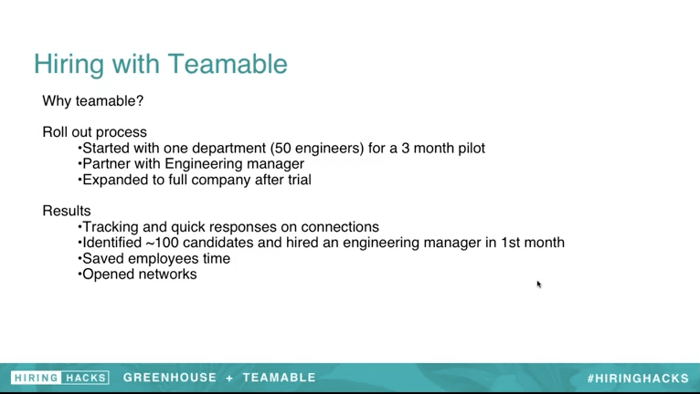 The Results: More Candidates and a Key Hire!

Stripe’s recruiting team opted to roll out Teamable with their engineering team. After recruiting a PM from engineering to be their champion and “street team,” they got 50 people to try using Teamable and A/B tested the results against their current referral rates. And it worked! This approach led to identifying 100 candidates and making a key engineering manager hire within the first month.

The recruiting team was thrilled: They now had a simple, scalable way to get employee referrals. And their referral numbers showed that it was working—at the time of the webinar, Stripe was back up to a 40% referral rate.